What you put in, you'll get back ten fold
********Wishing everyone a far better 2021 after our blur of a year in 2020 as we go into lockdown 3 and the new begining of the end of our leaning on the EU to find our own road again, I am sure it will all sort itself out again in the end as I am sure it will not be easy, as we also battle with China virus, please stay safe and strong as all our mental health tries to make sense of it all, we are still here on line for those that need our help on the spanner side to keep sane to erras all the madness around us, we are on you tube, FB and here if needed, by posting ,messages of email etc*********
The mazdamenders team

This is the section to see what is hidding behind those panels, and how to get rid of the tin worm, cutting out and welding in fresh metal, protection and paint.
Post Reply
7 posts • Page 1 of 1

I bought my first MX-5 (1992 Eunos V-Special) recently as my first project car. I intend to use it as means to teach myself how to work on cars, and I intend to fix it up and restore it as much as possible.

I've done quiet a bit of research into the rust issues and sill structure of the MK1 and what I understand so far is this (I hope it's correct):
There is an inner sill, an outer sill and the front wings and rear arches overlay the edges of the outer sill. There are 4 drainage holes embedded in the pinch welds under each of the outer sills, 2 near each corner (8 in total). There are also 2 soft top drainage holes behind the seat belt towers, these holes run into a tube which runs down through the inner sill and underneath the car where there is a one way rubber flap stopping debris coming back up.
From what I understand what happens is these drainage holes become blocked (mine were before I cleaned them) and water gathers in the sills, especially in the area between the outer sill and the outer wing/arch panel. Rust starts developing in this area which then spreads beyond that area into the inner sill, up the wheel arch, etc.

The inside of the rear outer sills can be seen via the inspection hole beside the seat belt towers under the plastic trim, and the rear inner sills can be viewed via a small hole covered with a rubber grommet under the wheel arches.

The other day during dry weather I finally got the chance to remove most of the interior and soft top, giving me good access to clean the soft top drainage holes (which were manky!) and gain access to the inspection hole beside the seatbelt towers.

I poked my camera in the passenger side and here's what I found:


And I've made an image with an overview of what I THINK I'm looking at on the passenger side: 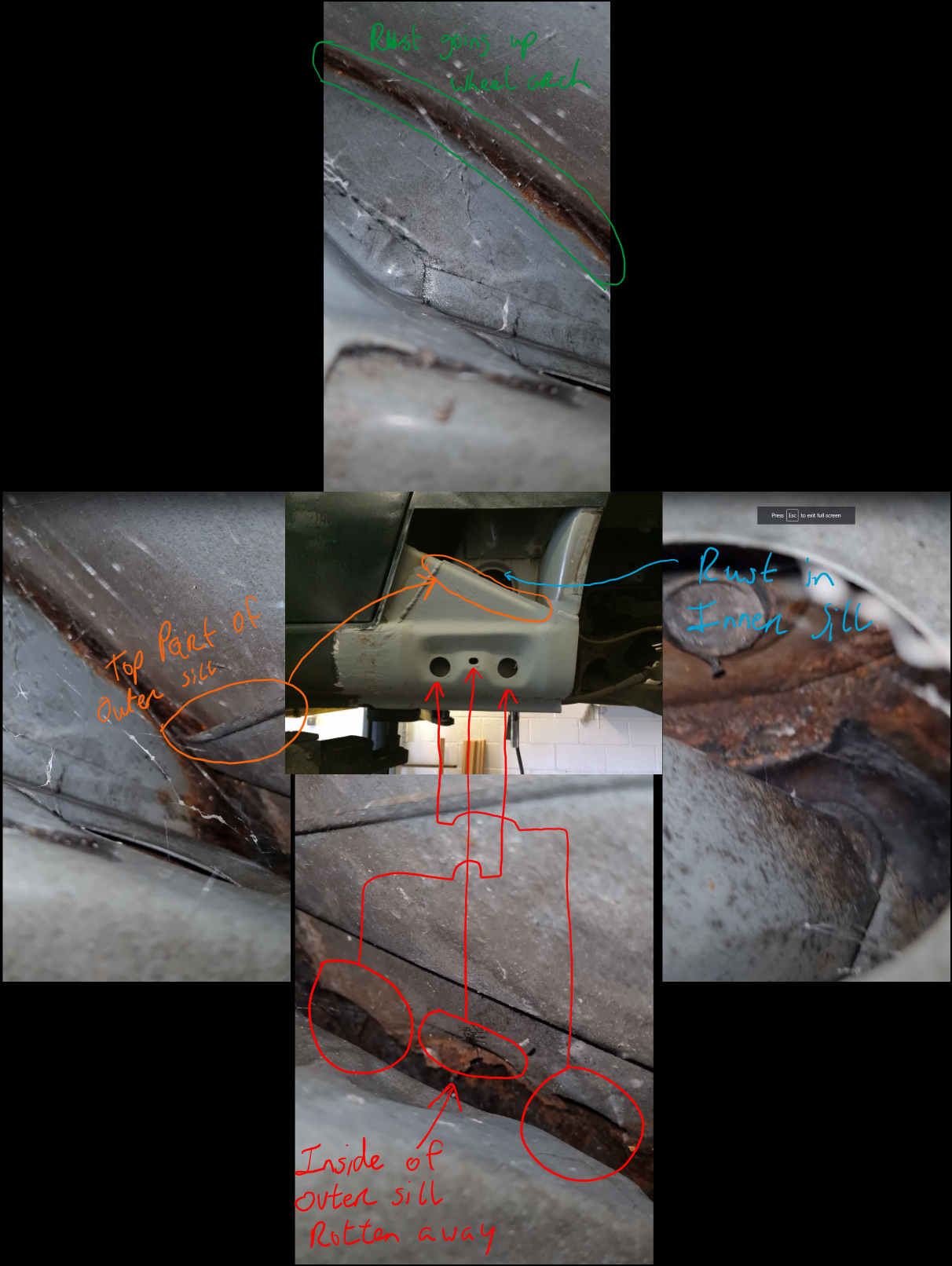 The driver side doesn't look as bad as that, but it does have rust in the same areas.

It looks to me that the inner sills have rotted and fallen apart just underneath where the two holes are, and it appears there is rust inside the inner sill which I'm hoping is mostly surface rust, and it looks as if its spreading up the rear wheel arch also.

I haven't got any pictures of the outside at the moment, but it appears there has been a botch repair job here before as the bottom of the wheel arch covering the rear of the outer sill is mostly made up of filler. There is also a very small patch of bubbling on the passenger side arch near the swage line. I've searched for area's that may have rotten through but most of the metal seems solid from the outside.

Also the 2 drainage holes that are meant to be in the pinch welds on the rear passenger side are not there, it looks as I've they've been sealed by the previous dodgy repair.

I live in Ireland, and I'm not aware any MX-5 specialists here that I could take the car to, and I'm not confident that a regular garage would be familiar with them enough to do a proper job. So my plan is to get a MIG welder, practice with it, and then try to tackle this repair myself.

The car is currently stored on my driveway, under a Halfords All Season cover. Its not my daily driver or anything so it won't be driven during bad weather and I take off the cover on dry days to make sure the car is aired out. Unfortunately it will be at least another few months before I have the time, money or the workspace available to attempt this.

So my main goal right now is to minimize its spread between now and when I try the repair.

Would it be a good idea to spray a rust converter like Dinitrol RC900 into the sills now or would I be wasting my time? Also should I drill 2 new holes on the rear passenger side sill seeing as the original holes are gone? And would it be a good idea to put some sort of dehumidifier next to the sill inspection holes inside the car to try keep the moisture level in there down? Any advice ye have would be greatly appreciated!

I am no expert but to me, the first thing to do is get her dry which is what you seem to be doing.

As for rust converter, dinitrol treatment, for me its six and two threes. It wouldn't hurt but dependant on the extent if the rust you might be better off leaving it alone till you can get into her and cut the bad out.

Life is a journey, best travelled topless in an MX5!!
Top

There is 3 sections to the sills...outer skin, inner support and rear section not excluding the wheel arch rear section....
The filler on the sills would not of done any favours to the metal and the drainage points being blocked over....
The bubbling on the arch means it's in the inside trying to get out so that all needs cutting out also for fresh metal..

Injecting at the minute will not make much difference now..so don't easy money on that until you start the cutting out process, protecting, etc...
I have one that's outside being done at the minute on the drive.....zinc weld primer is protecting the bare metal for the minute until all welding and all boxed up until I can inject and protect all the fresh box sections....
M-m
The Disclaimer:-
This post is a natural product made from recycled electrons. The slight variations in spelling and grammar enhance its individual character and beauty and in no way are to be considered flaws or defects, the articles/answers/comments are provided for information purposes and they are not intended to substitute informed professional advice, I or mazdamenders.net cannot personally be hold responsible for any damage occurred from following this procedure or any injuries from it. Proceed at your own risk.

There are plenty of repairers, restoration guys on here for advice.

But have a look at this.....viewtopic.php?f=35&t=5224
M-m
The Disclaimer:-
This post is a natural product made from recycled electrons. The slight variations in spelling and grammar enhance its individual character and beauty and in no way are to be considered flaws or defects, the articles/answers/comments are provided for information purposes and they are not intended to substitute informed professional advice, I or mazdamenders.net cannot personally be hold responsible for any damage occurred from following this procedure or any injuries from it. Proceed at your own risk.

Thanks for the advice.

The weather was good today so I did a bit more investigating.

Here's a picture of the pinch weld on the rear passenger side. I can't find any evidence of any drainage holes, so I'm assuming they've been closed up by a previous botch repair job. 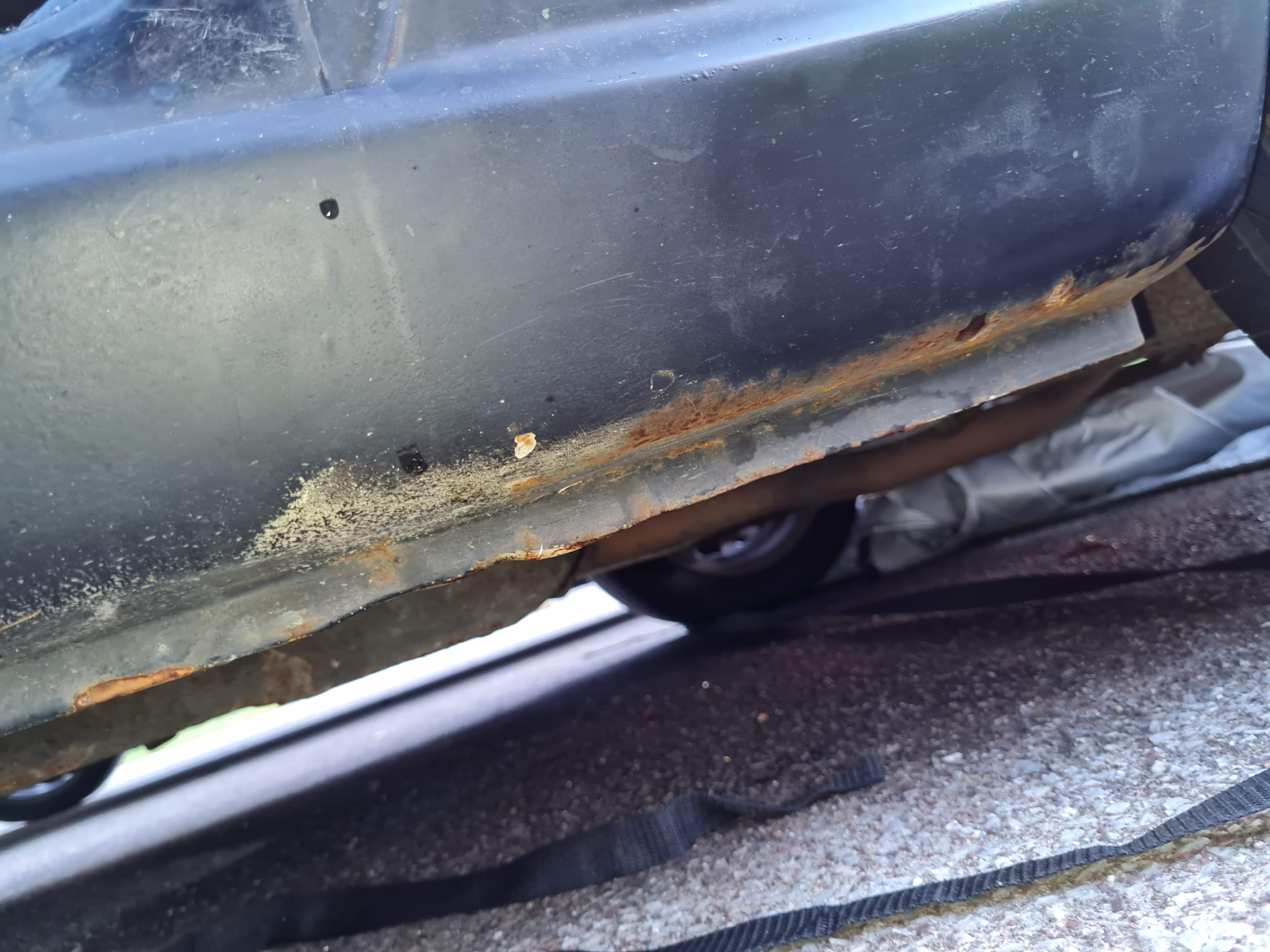 Also I discovered that there is a hole in the middle of both of the sills. About half way, underneath the doors. 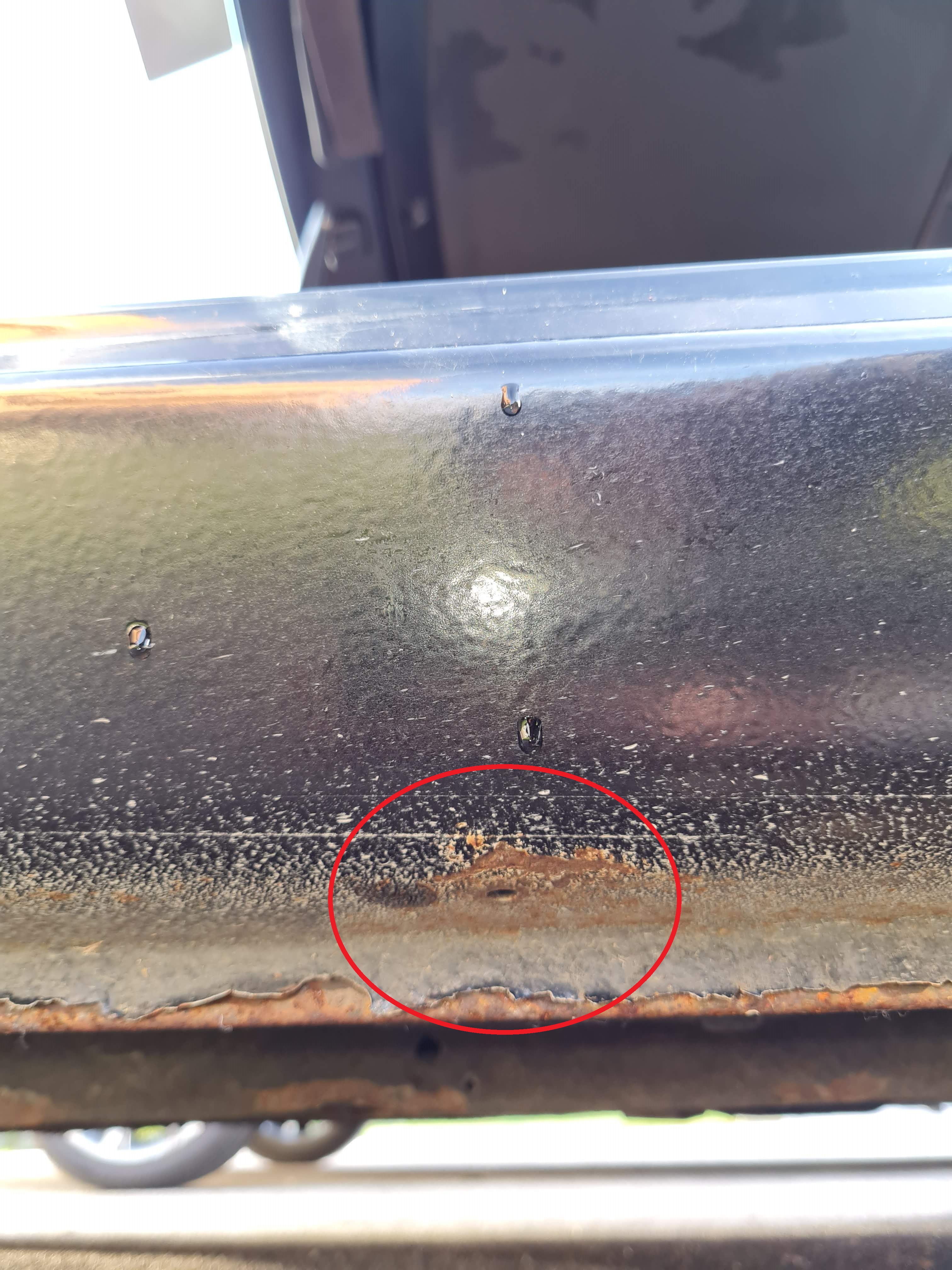 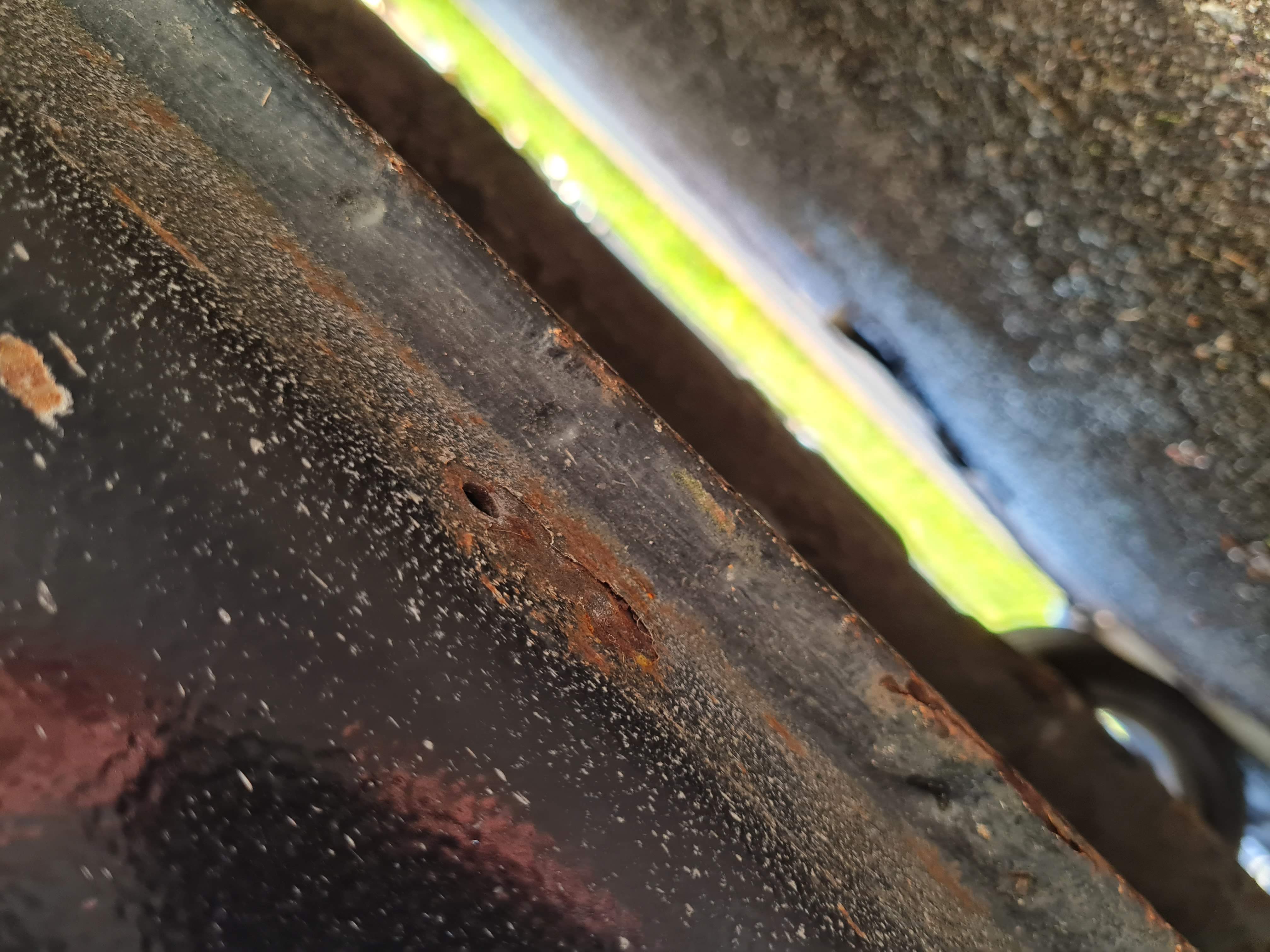 I'm assuming these aren't factory holes? And somebody must have drilled them there at some stage?

Here's a picture of the outside of the passenger sill. As you can see it's had a sh*te job done on it. There's a lot of overspray in the area, as can be seen on the roadster sticker also. And you can see the filler as the raised area around the edge of the arch. 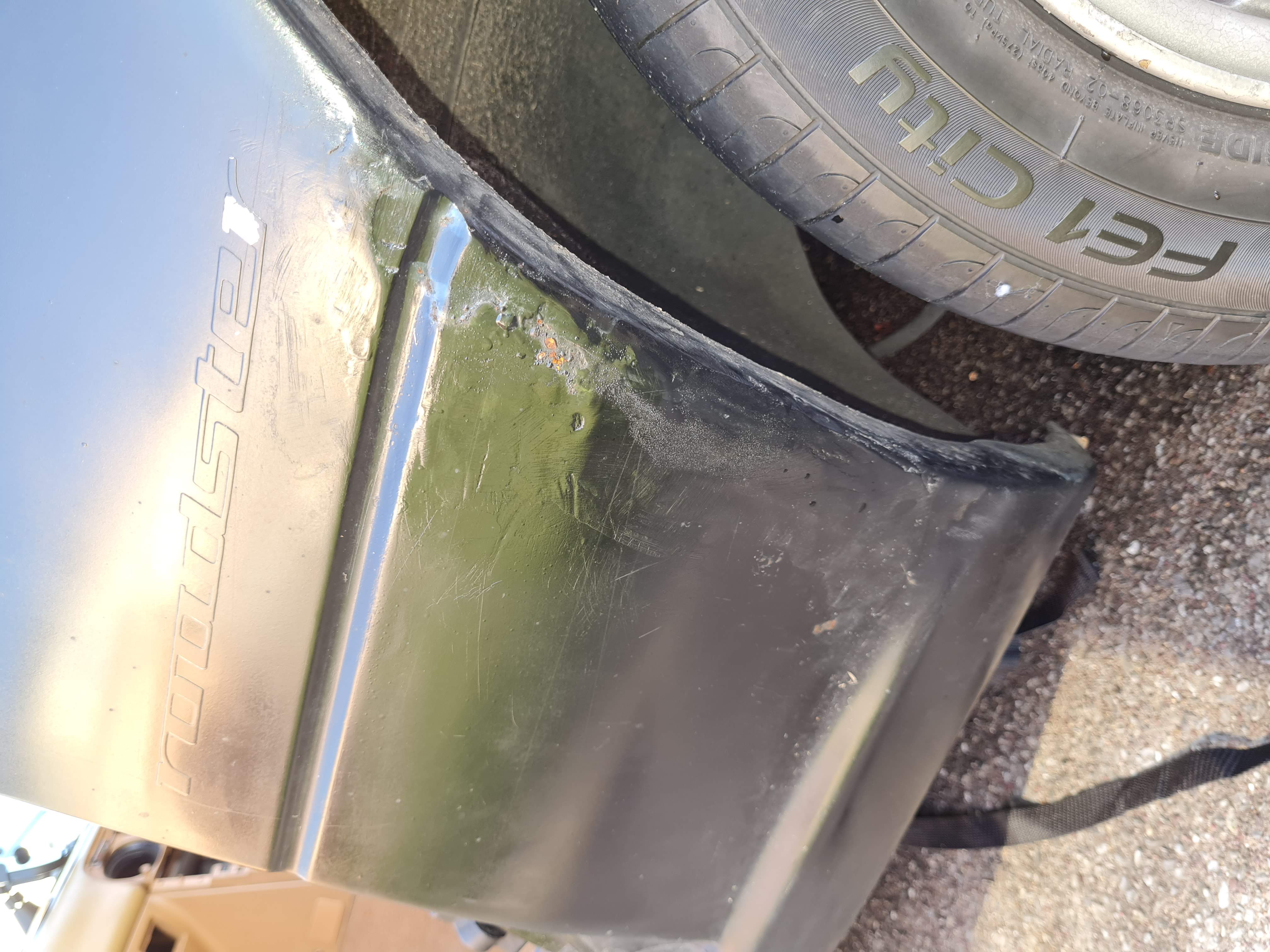 I've discovered some wetness in the driver side footwell also what seems to me like some surface rust. When I get round to it I'm going to take out the dash and the main carpet and get it all dried out. 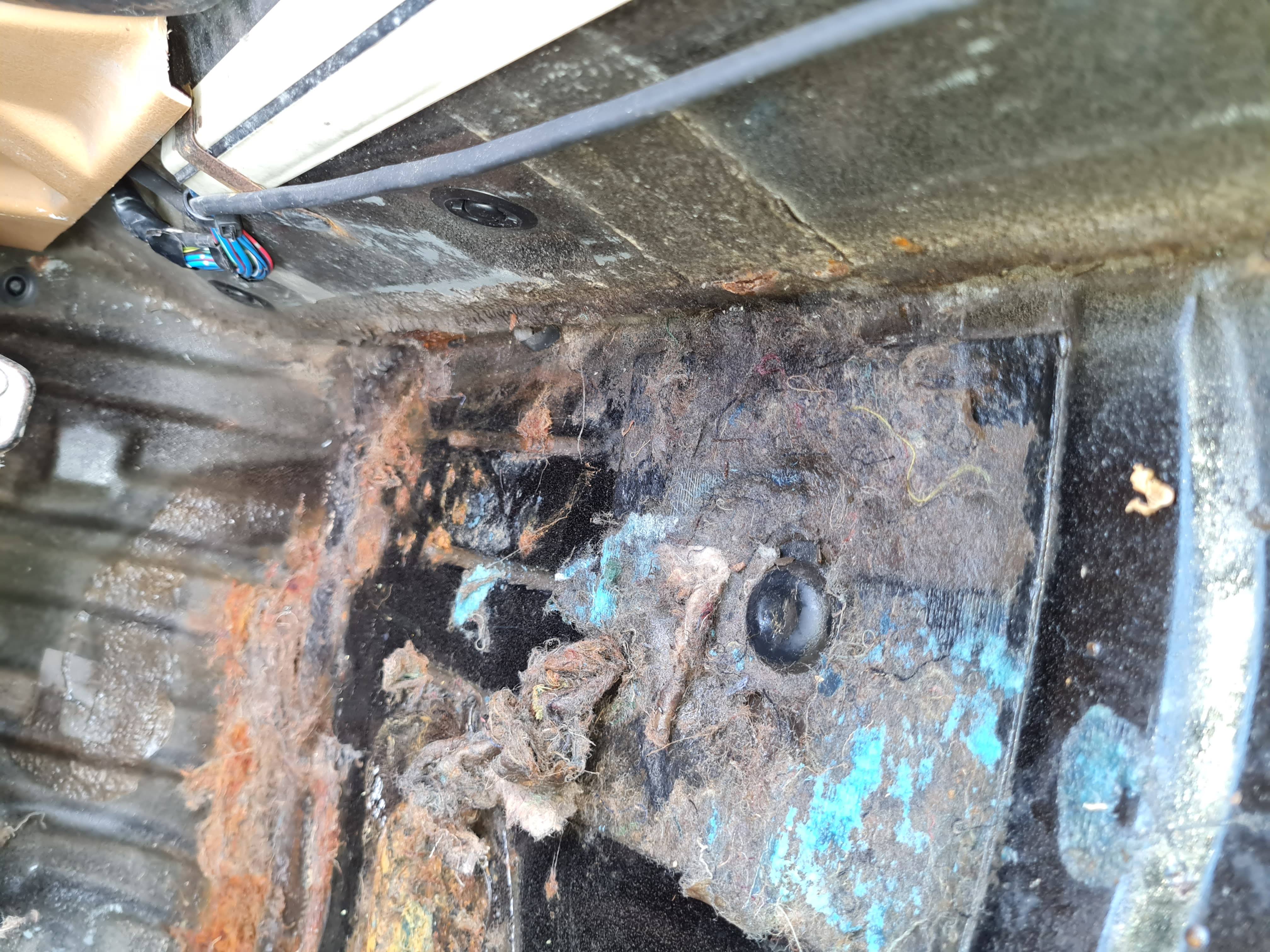 I've been doing some research into a beginner MIG welder. I haven't got much of a clue about welding at this stage. But what I have read is that gas is better than flux core wire, and a welder that can go down to ~20-30A is preferred for body panels.
I've been considering a Clarke 151en. Would this be a good choice for a beginner do ye reckon?
1992 Eunos Roadster V-Special
Top

Mig en 151 is more than up to it but defo use gas ...
The repair and super bodge is terrible and looks like it as been done by a 10 year old....and they have just covered over tin worm that did need doing which was hidden.

There is and will be a lot more needed equipment wise etc to be able to do this correct...

The Disclaimer:-
This post is a natural product made from recycled electrons. The slight variations in spelling and grammar enhance its individual character and beauty and in no way are to be considered flaws or defects, the articles/answers/comments are provided for information purposes and they are not intended to substitute informed professional advice, I or mazdamenders.net cannot personally be hold responsible for any damage occurred from following this procedure or any injuries from it. Proceed at your own risk.

Hi Buddy, welcome from someone else this side of the water. Sounds like you have big plans and fair play to you for having a go at the welding yourself. You havenâ€™t said where in this green isle you are based but there are more than a few 5 fans over here and Iâ€™m sure someone could point you in the right direction for some advice. I know of a guy in swords who breaks and tinkers with these wee motors and there are a few guys up here with one in particular who does restoration work. If you want a number give me a shout.

Good luck with the build and start a page and keep us posted, I need the inspiration.

Users browsing this forum: No registered users and 3 guests